It’s Halloween and before we wander out this evening to watch the local scene (no costumes, we’ll be the observers in the corner), seemed time to catch up on some of our recent happenings. 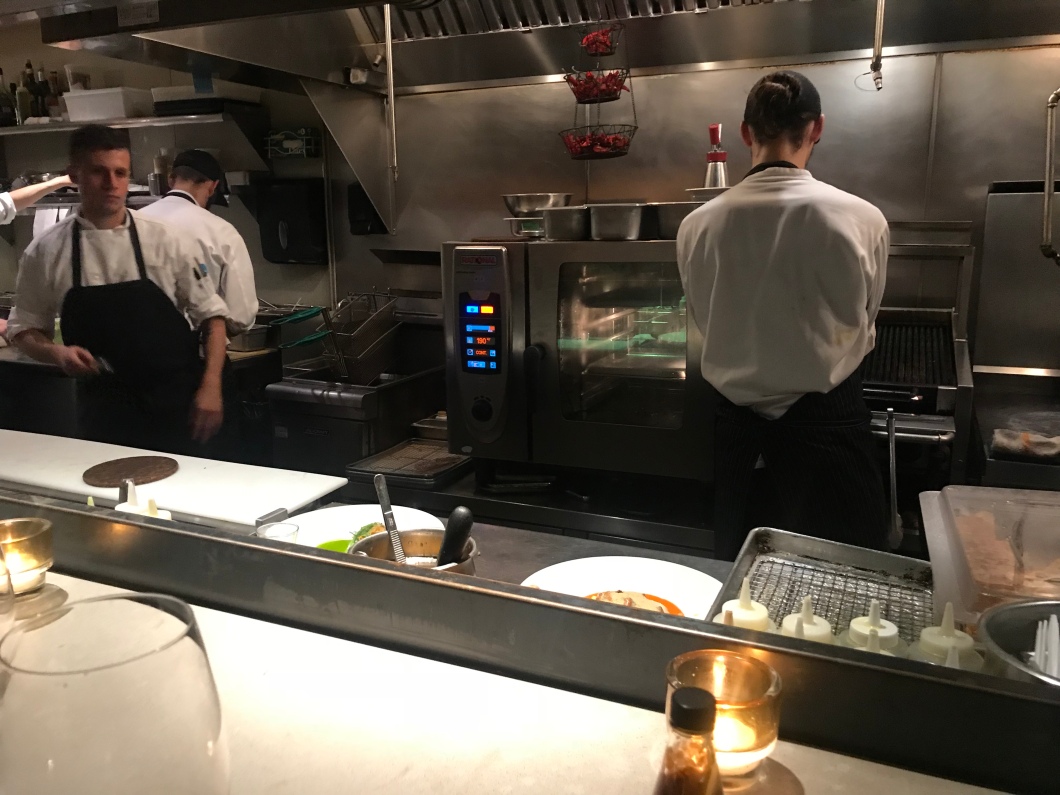 For our anniversary earlier this month we were able to get into Vernick’s Food & Drink, a contemporary “New American” restaurant on Walnut St. Greg Vernick is one of the new hot local chefs. Normally you need to book tables well in advance, but for this occasion we were able to snag a chef’s table on short notice because our night out coincided with an Eagles Thursday night game and everyone was home watching. Our good fortune because while there is a big bar in the front we could have stayed at, it was great fun watching the culinary team in action. It’s actually not a table but a bar that looks into the kitchen, with seating for six people. There are are also a number of small tables in this back room. We’d recommend asking for one of those if you like more intimate dining settings even if you don’t sit at the kitchen seat. We didn’t go upstairs into the main dining room, but we understand it to be more open.

As for the food, it was outstanding and while this restaurant doesn’t necessarily encourage sharing, we were quite full splitting one starter, a mushroom “toast,” an order of lamb sausages, and a special of the night, which was a whole grilled Bronzino. Often that is a smaller fish but this evening’s version was plenty for two people. It left room for a dessert, which we don’t often get. Out thanks to one of the chef’s for the recommendations. Definitely would recommend this restaurant for any serious foodie and anyone looking for a good spot for a special night out. Vernick is noted for his roasted chicken, but as we noted in our prior post, he often goes to William Mulherin’s & Sons for their chicken under a brick.

Next stop was a place near our apartment in Northern Liberties called Jerry’s. Good pub food and a small number of large-plate dinners. The place is about an eight minute walk from our unit, almost underneath the I-95 freeway overhead.  I could see us becoming regulars, though there are other places around us yet to explore. Pat had a pulled pork sandwich and I had some $2 tacos that were the special of the evening. The Margarita special was decent, and there is a good beer selection. We hit it before catching a show at the Fillmore, also just across the street from our place. The easy location was the only reason we opted to go to a concert on a Tuesday night.

The last restaurant we visited was Bud & Marilyn’s, in Center City on Locust St. It’s something of an institution that has been around awhile featuring hearty American fare. Think meatloaf and fried chicken and various things with biscuits. It’s comfort food and well executed.