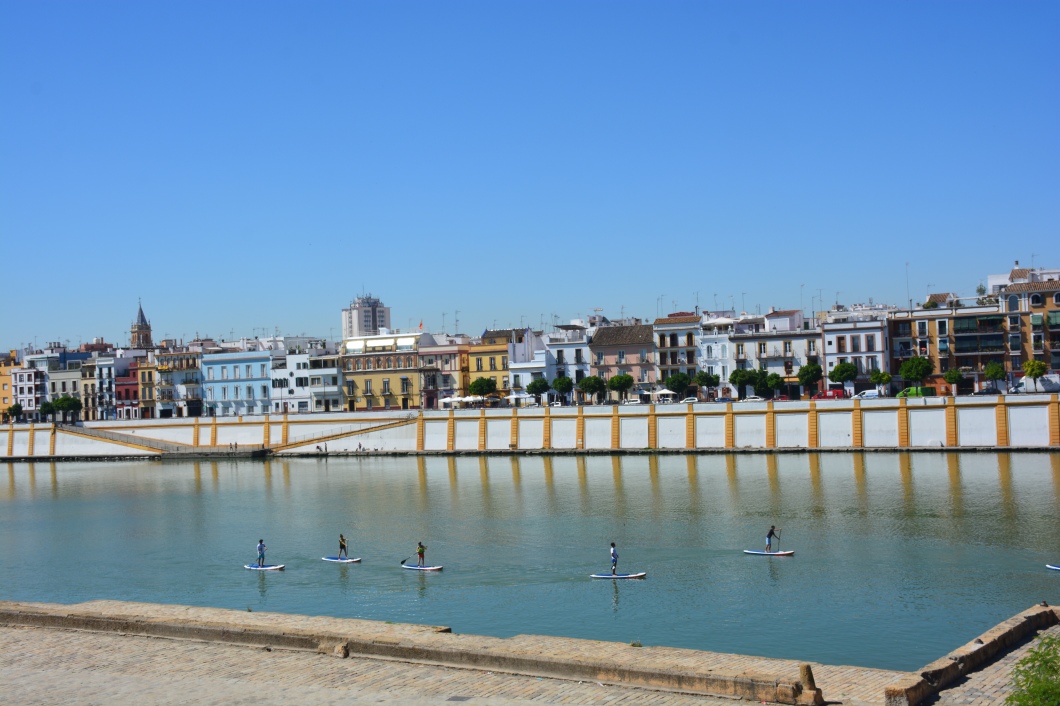 Our second day in Seville was the typical tour-until-you-drop kind of day. We pretty much did not stop. According to the activity app on my phone we walked a total of 10.5 miles. It started with us getting lost yet again trying to read the local tourist map. Turned what should have been a 15-minute walk into 60 minutes. We finally wised up and just relied on our phones. We did at least find much more of the city than tourists typically see, which is primarily the old Jewish quarter, the cathedral and the Alcazar. Turns out the map isn’t geographically accurate. A guide explained that the river that divides Seville from Triana, above, runs north-south but on the map it’s positioned as east-west. Not good.

After our aimless wandering we did find Plaza de Espana, one of the landmarks that is part of the Parque de Maria Louisa. After that we walked back to our hotel to meet our guide for a tour of the Alcázar and the cathedral, taking only the expected 15 minutes thanks to GPS. The initial construction of each building was started by the Moors, the Muslim rulers of the region until Catholic kings unified Spain in the 14th or 15th century. Alcazar means “the palace” in Arabic. You can research the details online, but each is well worth visiting. The Spanish king can still technically reside there when he comes to Seville, but he prefers a hotel in town. The second floor is furnished but that isn’t part of the tour or open to the public. “Game of Thrones” fans flock to it because some scenes in season five were shot there. 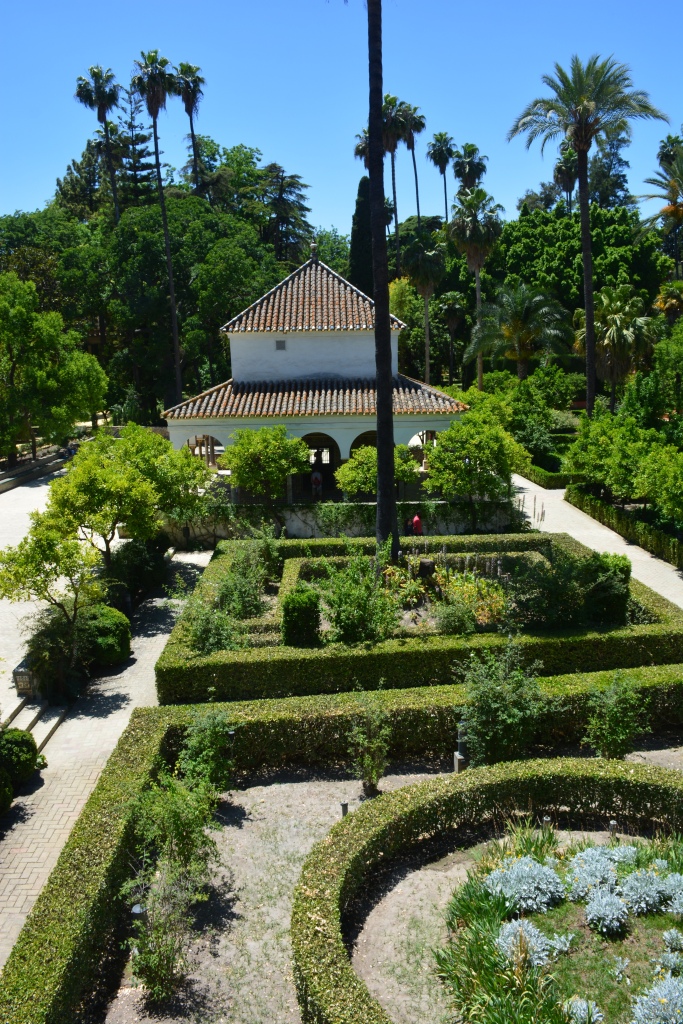 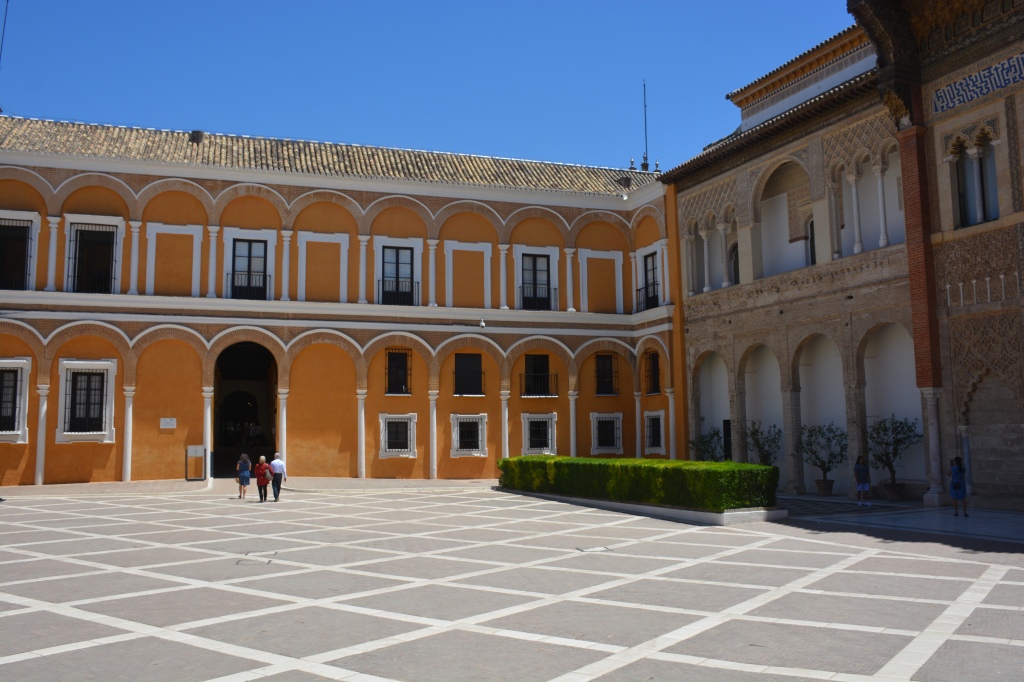 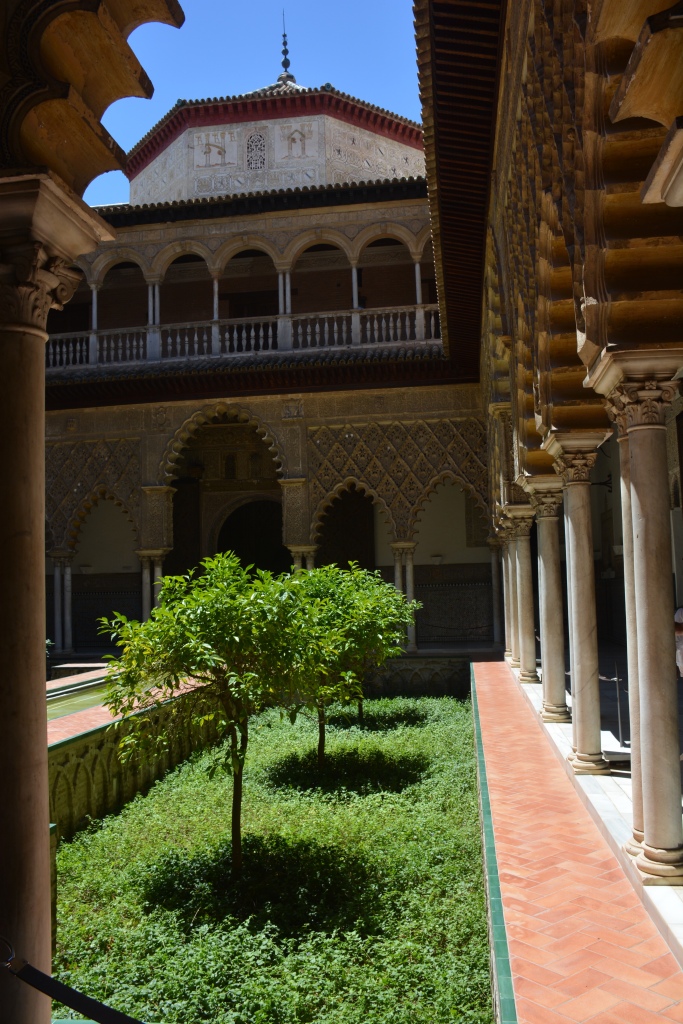 As for the cathedral, it is evidently the third largest Christian church in the world behind St. Peter’s Basilica and St. Paul’s in London. It is a cavernous structure but the bell tower that dominates the local views started as the minaret of the mosque the structure started out as. The Christians added a bit to its height. To get to the top, which we did despite a day-long walk, you walk up a ramp. It’s a lot better than climbing stairs. The imam responsible for the five-times-daily call to prayer used to ride a donkey up to the top to do his job, hence the ramp. 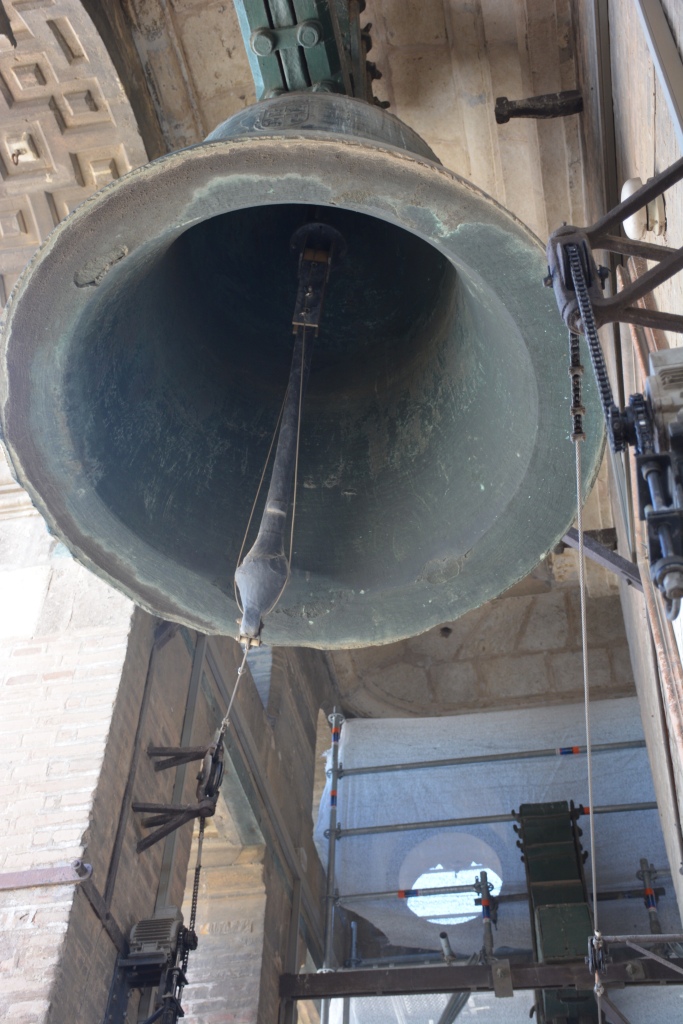 It’s also one of the locations for a tomb holding some of the bones of Christopher Columbus. His second son is also buried in the cathedral, which is certain, and the bones of the father that were brought back from the New Word (he died in what is now the Dominican Republic) were matched a few years ago. The Spaniards say they have about 20% of him, which reside in the humongous tomb below. 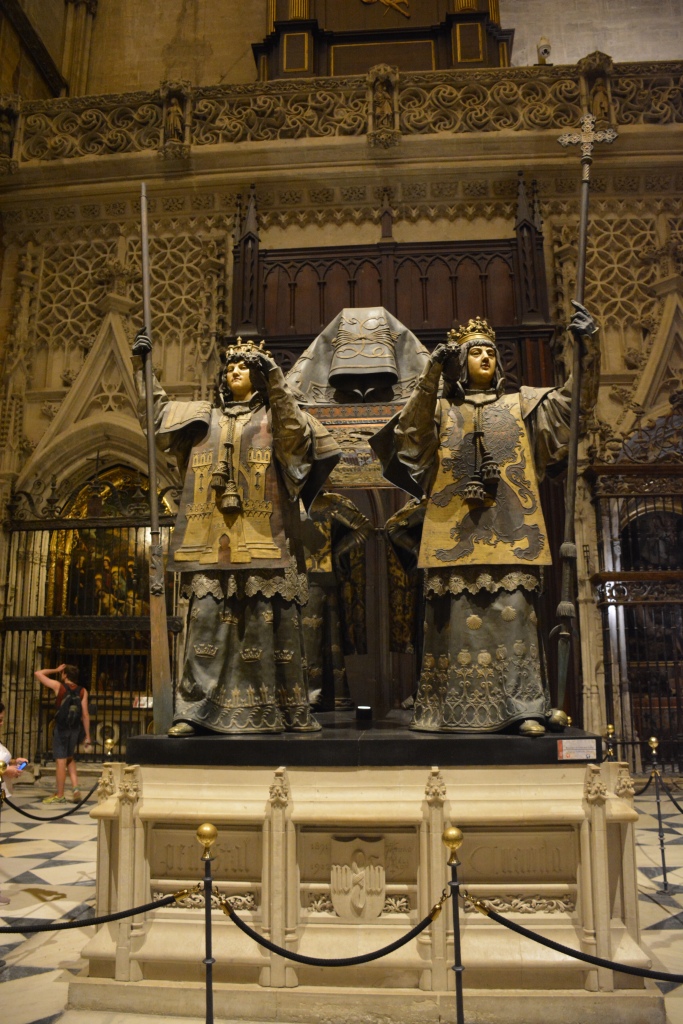 We wrapped up the day with a Tapas tour, hitting four spots all on the Triana side of the river. Hence the title of this post. The group included a Parisian couple and two British women and their teen-aged children. The guide was an ex-pat Aussie who has lived in Seville since 2011. He was enthusiastic to say the least. The first and third stops were our favorites. Number one was eating the traditional charcuterie types of meats: chorizo, Spanish salami, Iberian ham. Iberian is considered the best in Spain because the animal is more of a wild boar that’s allowed to roam and fatten up eating acorns. It’s kept for two years before slaughter. The Serrano ham we will see in the states is from factory-farmed animals. We ate it with dry Manzanilla sherry. Excellent.

Stop two featured shrimp and salt cod. The shrimp was tasty but they were small. Was a lot of work for a little meat. Salt cod is salt cod. You either like it or you don’t. I’m mense a mense. Had that with a beer. Stop three was fresh radishes drizzled with olive oil and slices of Iberian pork pounded thin, quick cooked on a grill, served on slices of bread, drizzled with more olive oil. Both were simple and delicious. That came with a wine punch, basically red wine with lemon soda. The Spaniards really don’t drink “sangria,” evidently. The last stop involved a croquette kind of thing, but also fresh spinach sautéed and served with chick peas and seasoned with cumin. It was very much a Middle East, North African kind of dish. That came with a bottle of Tempranillo. The Spanish aren’t that big on a lot of spice; their food is very different from Mexico. More like what we had years ago in Argentina.

Overall a very enjoyable experience, but all of those small plates added up. And it was an absolutely gorgeous night, as seen below. 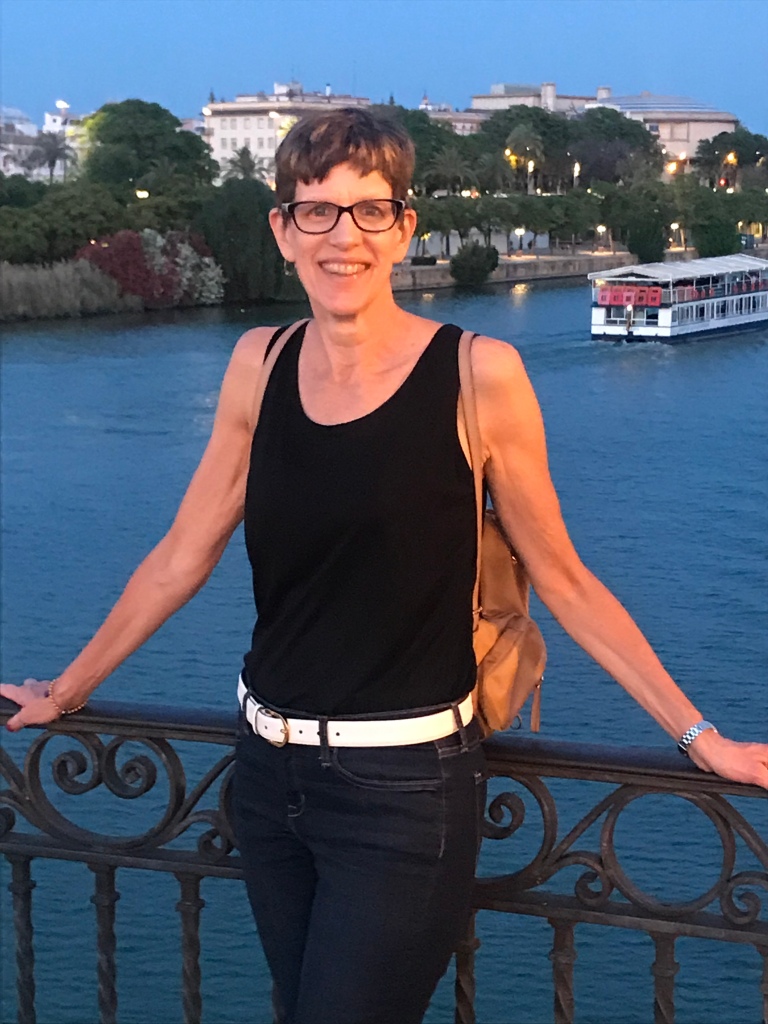 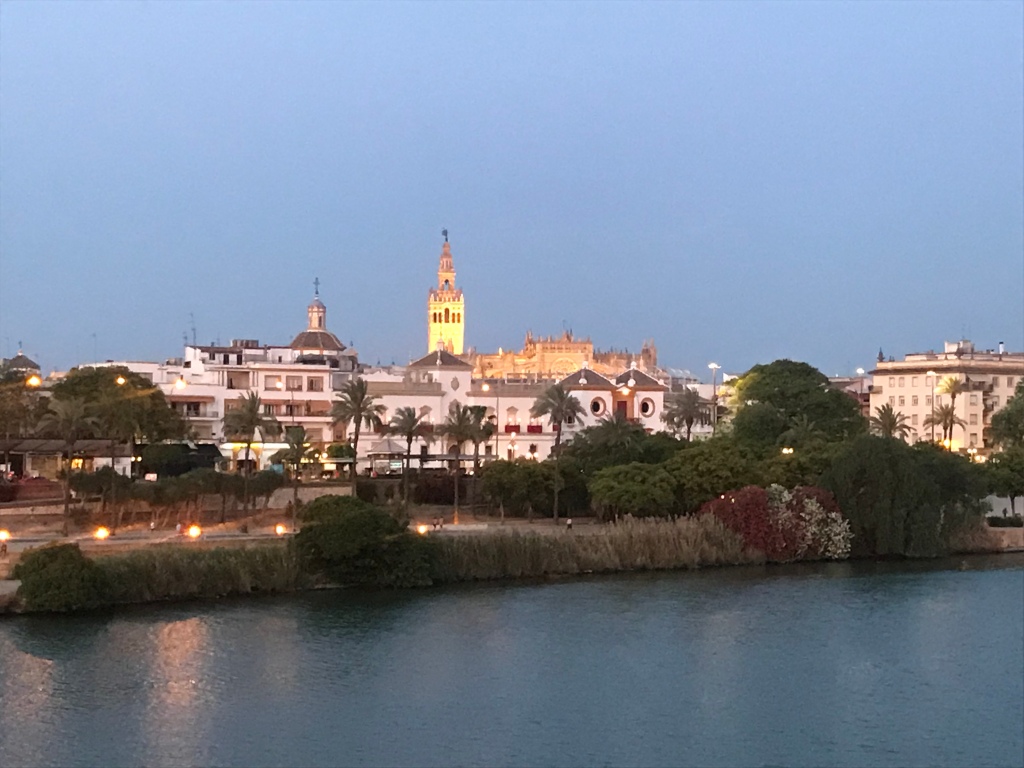