Today was built around a trip to view the Tasman Glacier, the largest glacier in New Zealand. It was a boat trip on a lake created from the melting glacier and runoff from the mountains. Later we are going to go on a stargazing trip based on a recommendation from another couple on a bucket-list trip to Australia and NZ. When we asked for their favorite parts of the trip they said the top was snorkeling in the Great Barrier Reef. A close second was stargazing. This being our fourth visit to the Southern Hemisphere, we decided it was time to give it a go. Hopefully the sky will remain clear.

The bottom of the glacier can be seen in the photo at the top. It is not floating; the ice stretches hundreds of meters below the surface. It also stretches up and to the right into the mountains, which isn’t visible in this photograph. And yes those are rocks on the surface, likely 300 years old, carried by the force of the moving ice. Pieces of the glacier do break off and form ice bergs, as seen below. 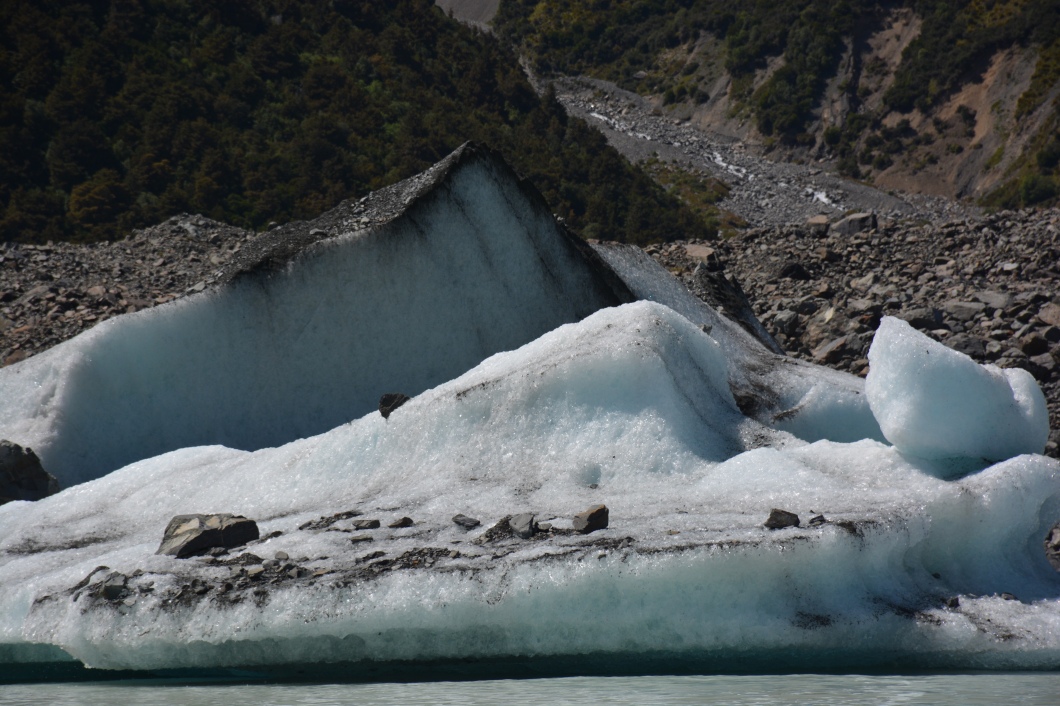 We were able to get up close to the bergs (there was no Titanic-like risk) to touch and taste ice formed hundreds of years ago. But it is also true that the lake, which is now about 5 kilometers long, didn’t exist in the 1970s. The glacier stretched the entire length, and you could walk on it. To do so now you have to take a helicopter tour up into the mountains. kind of sobering to think about.

Below, here we are on the boat. Good pic from our guide, Gerry, who was excellent. Very informative.

And while it was chilly on the boat when we picked up speed, the weather was quite gorgeous. On our arrival day I know Pat didn’t think she’d wear any shorts, but in the afternoon she did when we went for another “tramp,” this one hilly and wooded. It was only a 50 minute walk but actually more challenging than yesterday’s trek. The trail was called Governor’s Bush. Unlike the crowded Hooker Valley Trail, we had this one to ourselves.