On our first full day we went to pick up a rental car, normally an afterthought on many trips but this was going to be my first stab at driving on the left. For the most part, other than consistently turning on the windshield wipers, it being the left-hand lever that controls the turn signals on left-hand drive vehicles, it wasn’t too bad. It helped starting out that Christchurch is fairly mellow, and it was a Saturday. It also helped to have our niece Casey as the back seat driver reminding me of some of the rules of the road. It almost allowed me to ignore her aunt. It got interesting later in the day, after we took a drive to a beach town called Sumner.

First, Sumner was about a 15 minute drive. The beach is wide and smooth and it’s on a horseshoe-shaped bay that is popular with surfers and kite skiers. Not as wild as the waves we saw in a similar setting in Portugal, but still active enough. After some beach strolling and a visit into the town (which looks pretty much like every shore town we have seen anywhere in the world, except I didn’t see any t-shirt shops) we stopped for a quick lunch. The question was where to next? 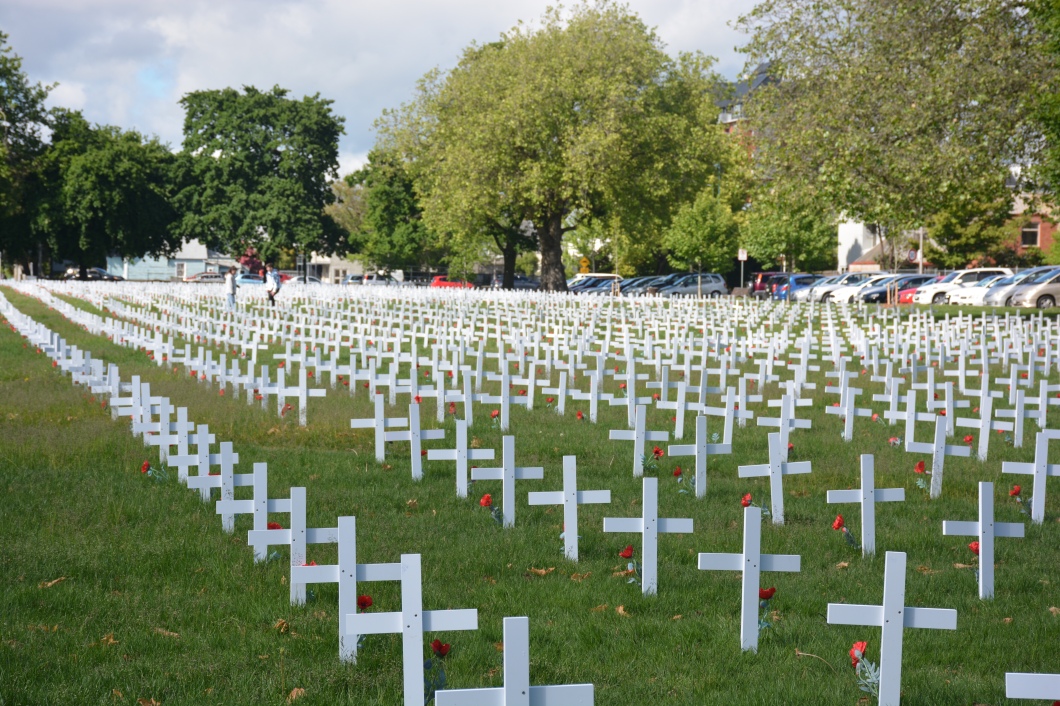 November 11, for those not aware, is the 100th anniversary of the armistice that ended World War I. Earlier in the day we happened upon a park, seen above, loaded with wooden crosses to commemorate the New Zealanders that fought and died for the Crown. That led Pat to remember one of the places near Sumner, called Godley Head, which was used in the next big war as a lookout point. OK, different war, but the views were supposed to be spectacular. So off we go. As we head up the mountain we encounter a closed road and we have to take another road off to the left.

We didn’t realize the closed road was the one we would have wanted; instead we were headed to Taylor’s Mistake. Might be renamed Pat & Jim’s mistake. I’ve been on some twisting and turning mountain roads, but never one this narrow and lacking guardrails. Poor Pat was in the left seat of course, nearest the cliff-edge. Naturally she was urging me to stay more to the right, which was fine when we were hopeful this was a one-way road, but we were quickly disabused of that belief when we encountered two angry bicyclists heading downhill. They weren’t happy to have us creeping to the wrong side of the road. Fair enough, though in my defense, they were in the middle of the road and it was damned narrow. So we pressed on, meeting cars headed back down as well. In truth there was no choice but to keep going because there was no way I was going to be able to turn around. Ultimately we got to the top of the mountain where there were several cars parked. It is basically the head of a popular hiking trail, and there were also wind surfers up there getting ready to launch. But at that point I was not going to hang around for the aeronautics; we got ourselves turned around and gently made the trip back down.

Casey assures us most roads aren’t like that (she has not encountered anything similar before, but it was quite the introduction to driving on the left-hand side.) Actually, it would have been a white-knuckler if I were in my accustomed driving position because then I would have been the one worry ing about the cliff-edge. I think I earned my cocktail later (Uber will handle that drive.) But as the picture at the top makes clear, the scenery was quite something, though I largely missed it and it doesn’t capture how close to the edge that drive seemed. I’m just going to assume driving for the rest of this trip won’t be as daunting. Now, if I just remember that the turn signal is the lever on the right side of the steering column, I think I’ll be OK.