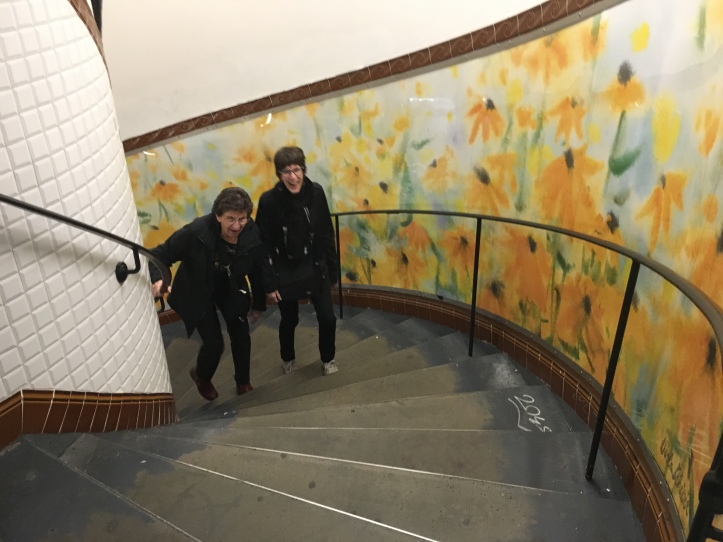 Touring Paris efficiently requires becoming adept with using the Metro, and use it we did to traverse large swaths of the city. Sunday was the nicest day we have had weather-wise, so our destination was the Montmartre area and the Sacre Coeur basilica. Nice idea, except the church was at the highest point in the area, and the nearest Metro stop, Abbesses, is the deepest one in Paris. Several looong circular staircases brings you eventually to the exit. Thought Grandma (and Guy Lebo) were going to buy the farm on the way up. After that, it’s another couple of long staircases, unless you find the funicular. We found it, of course, after largely walking the entire distance up.

Tip: it’s much easier to take the Metro to the Pigalle or Blanche stations well below the Montmartre area. The latter station is across from the Moulin Rouge, the other is a bit deeper into the red light district, with plenty of sex shops and strip joints. However, you can pick up a touristy tram that takes you to the top for around 6 euros. It’s a bit goofy but much easier than walking up.We did it ass-backwards. We started at the top. But if you end there it is a short walk to the church. The area was packed yesterday with tourists and locals because it was a nice Sunday, there are plenty of shops and also a Salvador Dali museum that we wanted to find. Alas, as is our luck, it was closed for some sort of repairs. Poor Guy, a big Dali fan, was crushed.

This morning we sought out the Musee L’Orangerie home to Monet’s famous waterlily paintings, huge panels that are housed in the first floor of this space. The museum is adjacent to the Tuileries, not far from the octagonal pool. We opted to walk there from our hotel, taking the lower level closer to the water level of the Seine. It’s popular with joggers, cyclists and skate boarders except on the right bank it quickly turns into a long pedestrian tunnel. Now while we stayed out of the wind and rain by using it, we didn’t see any sights for roughly two kilometers. But you do emerge pretty much at the museum.

We thought the museum was pretty much just the waterlily panels but not so. On the lower level is a collection amassed by a Paris art dealer named Paul Guilliaume, who put together a pretty impressive selection of impressionist art. In addition to Cezanne, Renoir, Rousseau, Picasso and Modigliani — you know, the usual suspects — he had works by Marie Larencin and Andre Derain. We have been to may retrospectives of impressionist art, but we had never heard of Larencin. Much of her work featured female dancers and animals, like below. After that is a portrait of Guilliaume, who died relatively young. This collection is worth a visit if you like Impressionist art, and you can buy a combo ticket that is good at the Musee d’Orsay (tomorrow morning’s destination) that offers a discount over the individual tickets. They are good for three months.